The countdown has begun for December 25 and here at Volume by Alcohol we decided to spread the cheer in a more adult fashion, a Beer Advent Calendar. Every day we will count down to December 25 with one unique beer, since we’ll be enjoying these brews on the actual date of the calendar we will post about them on the following day. These will not be extensive beer reviews but more of a snap-shot. Hopefully you will find these helpful and can locate some of the beers we will be discussing at your local bottle shop or pub! 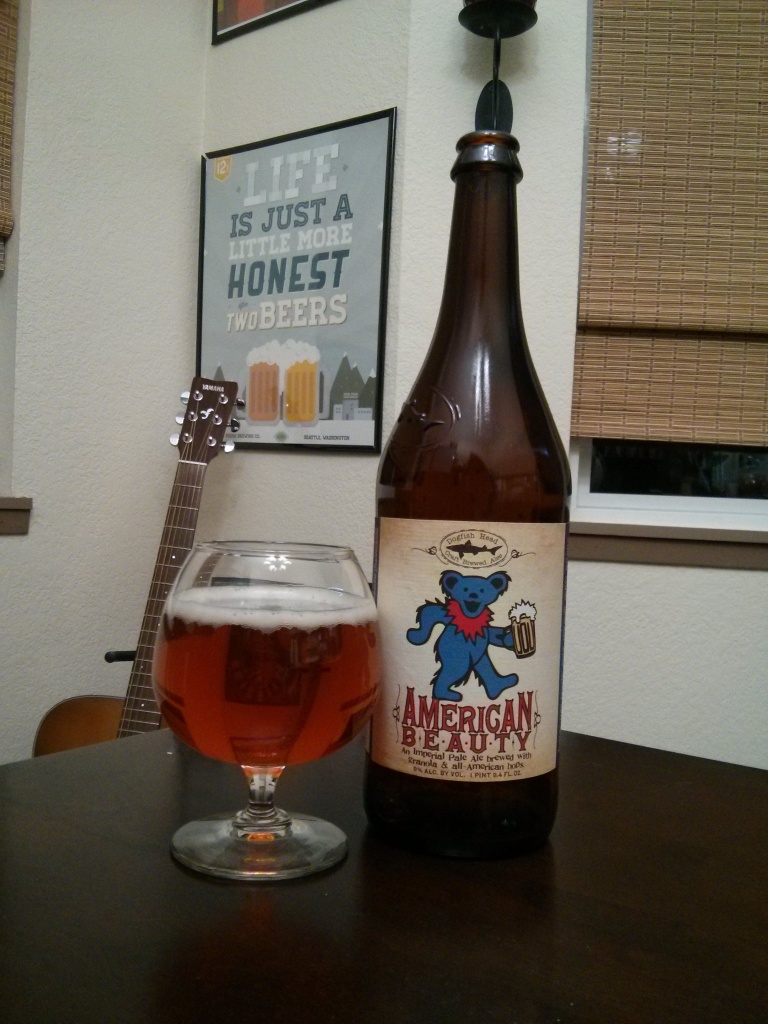 Dogfish Head Brewing has a Music Series of themed beers that range from honoring Miles Davis (Bitches Brew) to Pearl Jam (Faithfull) to Deltron 3030 (Positive Contact), and they pair each beer style to that artist in a way they feel complement’s the artist’s spirit and style. Such was the case with American Beauty, Dogfish Head’s tribute to The Grateful Dead. Dogfish Head took to the internet and let the fans speak their mind and vote on what the main ingredients should be and organic granola won by a landslide.

American Beauty poured copper with a white head that left after my initial sip, but did leave small white bubbles around the edge of the glass for a long time.  The aroma was alcoholic and pungent with a mustiness to it, reminiscent of wine grapes.

The beer itself tasted like toasted bread or biscuits, mainly in part due to the granola in it. The heat from the alcohol was a bit over-powering while drinking, it was the main flavor you got in every sip instead of hops, malts, or any other ingredient. At the end of your sip you get a hop-forward bitterness that clings to your tongue. The mouthfeel was sticky, similar to canned peach syrup and left an odd residue on my tongue. When I exhaled after my sip I got more booziness and the syrup flavor.
Overall I was not a fan of this and ended up only getting through half my glass, which the bottle was shared among three people. One other person did not finish theirs, either. Perhaps Dogfish tried a bit too hard to make so many flavors happen in American Beauty and instead of complementing each one all the ingredients fought for the spotlight. An imperial pale ale would have been fantastic minus the syrup mouthfeel and over-powering alcohol heat. The granola did not come through as much as I was hoping, perhaps Dogfish Head can try out a trail mix brown ale next time and highlight the oats, chocolate, and nuts along with dried fruit characters (Sam, let’s talk).
While American Beauty was a let down for us here at VbA we are still looking forward to future Music Series beers by Dogfish Head, they do great work and have been a huge pioneer in unique craft beers and we will continue to support them.
Advertisement