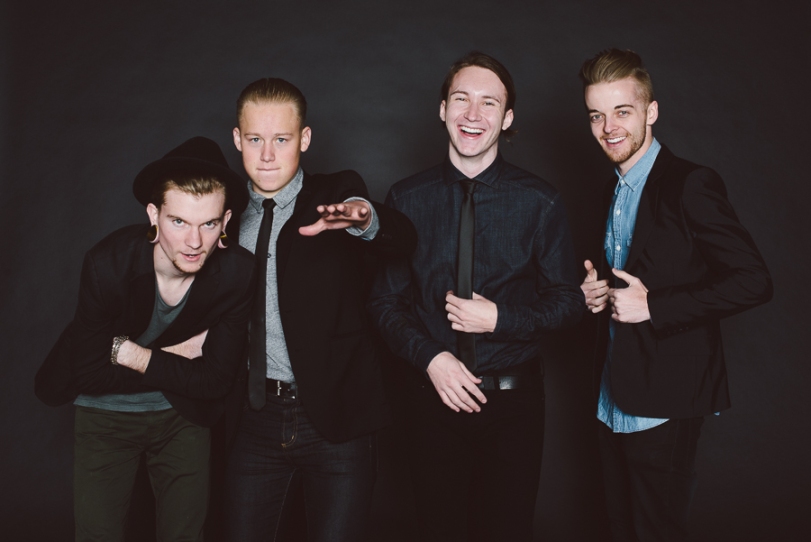 Utah-based quartet Mister Smith has barely been around for one full year (according to their Facebook they were created on November 11, 2012), but from the first sound of it you wouldn’t have guessed it. Nor would you notice the fact that some of them seem freshly out of college, which is a shocker to learn once you hear the intro to “Devil’s Game”. The band has a few various genres they tinker with in their debut self-titled album – that came out earlier this year and has been heavily played by us – which dabbles in blues, rock, and pop, but the vocals and how clean their sound are what really caught our attention.

While we have yet to seem them perform live (read: Mister Smith you should come to Seattle), every Youtube performance we can locate shows us they perform in full on black, formal suits. Now if that doesn’t spell classy then we don’t know what to tell you. We definitely envision Mister Smith sipping back on a bourbon-aged imperial oatmeal stout while rocking their signature duds. And so, we paired their “Devil’s Game” song (and video) with the oh-so-classy Kentucky Dark Star by Fremont Brewing (Seattle, WA- hoping they get the hint to tour out here).

One of the things – besides the music – about this video that really grabbed my attention is the little subtle messages throughout the video. One such example is in the beginning when the Devil and Oskar Buie (lead vocals, guitar) shake hands, it is a head tilt to the old legend of blues singer Tommy Johnson (or Robert Johnson, depending on whom you heard it from), and how he sold his soul to the Devil himself to master the guitar. Another example is how the cinematography is such that you are forced to feel uneasy and edgy with the crackling on the screen; but don’t fret, Fremont’s KDS will surely relax your nerves.

If you can not view the video here is the Bandcamp stream:

As the sun fades away earlier and earlier each night and the darkness creeps upon us sooner than we expect, the one comfort is being able to sit down at home and pour a strong beer that will slither down the insides of your body warming you from the inside out while chasing away all the demons from the day, and Fremont Brewing’s Kentucky Dark Star is nothing short of perfect for a night such as November 1 and a song like “Devil’s Game”.

The beer itself pours an almost jet-black shade, reminiscent of the Devil and the intro to the “Devil’s Game” video. The head is a light caramel tan that sticks around for a short period, not wanting to wear out its welcome. KDS has a strong chocolate, vanilla aroma that bleeds into the flavor as well. While you sip it you also get a small hint of coconut, while the bourbon comes out with a bang.

The oak notes play well with the presence of the Devil himself, lending to vivid images of fire and brimstone moments while the bourbon aging dances on your tongue giving you flashes of boozy heat, all the while you can’t help but think that the lead singer’s vocals are raspy from years of whiskey and exotic cigars (spoiler: they’re not).

It’s of no surprise that Kentucky Dark Star sells out quite quickly whenever it is released, and every bottle shop and Fremont themselves make limits of how much someone can buy.This is a delicious, rare treat that if you are able to get your hands on then gather up a few close friends and share the love. After all, the beer clocks in at a hefty ABV (Alcohol By Volume), of which the 2013’s label states 9.5% however we have read that it is really closer to 11% and when you taste it you will likely agree on the higher ABV count.