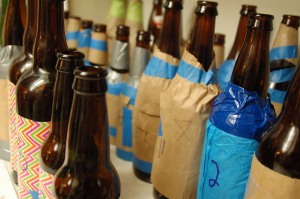 It’s that time again for another Blind Beer tasting. We let the winners from the last tasting decide what this tasting will be on and they chose Fruit Beers. (Disclaimer: The winner really chose Barleywines but we were having complaints that people could not find Barleywines at any bottleshops or at least enough for a decent variety at the Tasting. The Stout winner chose Fruit beers as a backup.)

The rules are (somewhat) simple: Every person showing up had to bring a beer in the specified style and that was wrapped or the label concealed. We asked attendees to bring either a 750 mL or a couple of 12oz bottles so that everyone could get an adequate sample. Since most beers were wrapped in paper bags it was easy to simply write a number on the outside of the bags so we kept all beers in order. Overall we ended up with 18 people and 20 beers (some extras were brought.) We then handed out scorecards that were basic in nature with a rating of 1-10, with 10 being the best and 1 the worst. Our one rule for Fruit beers was that it could not be a sour. Other than that, any style of beer as long as fruit was a main component was fair game.

There was only one beer opened at a time, this way it alleviated any confusion on people wondering what numbered beer they had. As the bottle(s) made the rounds at the table we all discussed what we thought of the beer (smell, taste, color) and scored it. There was a variety of snacks to help with the various beer samples.

After the final beer we tallied up and averaged out all the scores for each beer and then it was time to crown the winner. We gathered all the (empty) bottles and started with the last place beer and worked our way down to the winner, taking off the paper bags with each person saying what beer they brought once revealed. There was a tie which is why the rank is thrown off a bit below. We ended up having two of the same beer, Epic’s Brainless on Peaches and Dogfish Head’s Black & Blue. I’ll note next to each one since the same beer did place differently (which could be due to an older batch, or even the more we drank the higher the scores got. Many variables to be honest.) There will be a #1 next to the beer that was drank first, and a #2 to the second time the same beer was consumed.

Congratulations to Liefmans for winning our Blind Beer Tasting on Fruit Beers! We also spiced things up a bit for this Tasting and gave whoever brought the winning beer a prize, which happened to be a gift certificate to Brouwer’s Cafe in Fremont. Brouwer’s is a fantastic pub that offers great food ontop of their incredible draft and bottle selection. We paid for the certificate ourselves and Brouwer’s has absolutely no clue who we are, we just really like them. We are going to attempt to do a roughly $20 prize for the winner from now on to entice people.

We did not have any disqualifications for this Tasting (that’s a first I believe.) While there was some skepticism regarding the winning beer (Liefman’s Cuvee Brut), after some Googling we came to the conclusion that it is a beer and not a wine. The winner got to choose the next theme and decided on Pumpkin beers. We are taking August off and will hold the next Blind Beer Tasting: Pumpkins in early September! If you have any recommendations for Pumpkins ales or even a theme for a future Tasting  feel free to post them in the comments! 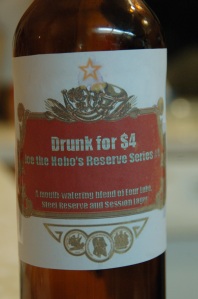 The last place beer (Joe The Hobo’s Drunk For $4) was actually a joke beer and something one of the attendees put together. He blended Four Loko, Steel Reserve and a session lager together, bottled it, and slapped a label on it that he printed at home. We were proud of each attendee because we all rated it very low.

We have had an on-going Spotify playlist that we created called ‘Craft Beer Night’, that features a lot of indie artists as well as some more popular groups. We are constantly adding new songs that we find and enjoy and would like to share it with you! Craft Beer Night is typically always playing whenever we have people over for beer tastings and is great as background music on Shuffle. Enjoy and if you have any music (new or old) you think we should add to Craft Beer Night let us know.

We really enjoyed having one style of beer and trying a variety and comparing them. We are trying to get other breweries a try but only certain ones are distributed to the Seattle-area so if you ever find yourself in Seattle with extra beer we can’t get, let me know!

Hopefully this will inspire you to plan your own tasting! If you do, let us know in the comments! 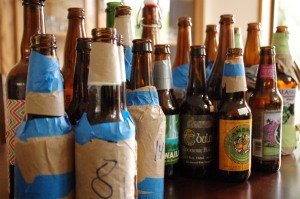