In an effort to bring a wide variety of music and beer options for your listening and drinking pleasure, Volume by Alcohol often tries out new and old songs and brews. We also try to showcase not only craft breweries but the Big Guys as well, because sometimes they make a high-quality beer that is deserving of a music pairing on VbA. The same can be said about mainstream music and in particular pop. While pop music, like some Big Guys’ beer, might have the flashy packaging and over-groomed looks, that does not mean that there are no high-quality songs that are not worthy of a beer pairing.

Case in point: Spice Girls’ “Wannabe.” This 1996 pop hit was catchy, had enormous girl-power vibes and catapulted an all-female group to the top of the charts. The quintet had numerous hits however “Wannabe” was their first and largest by far. The England pop queens rose to fame quickly and travelled the world extensively performing show after show to sold-out crowds. The Spice Girls had a long run in the mid-90’s to the early 2000’s. 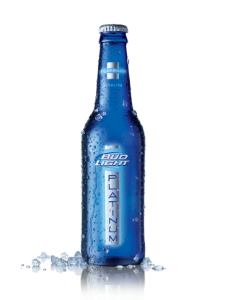 The pop hit was light and refreshing, considering it came out after the long-run Grunge scene. Because of the drastic change to the deep grunge songs, “Wannabe” seemed like it should be paired with a beer that is as light and refreshing as the song: Bud Light Platinum. The new addition to the ever-growing Budweiser line instantly hit the ground running with its flashy packaging (like The Spice Girls’ wardrobes) and the ad campaigns geared towards attractive men and women in their mid-20’s to early 30’s. Various TV commercials showed the demographic in various bars and parties having the time of their life and really enjoying the brew.

The translucent blue bottle brings us back to The Spice Girls and how they also changed the pop world. While Madonna has been the Pop Queen for years and always intrigued people with her costume choices, The Spice Girls consistently stunned the masses with their unique clothing choices and incredibly high-heels all while being slightly futuristic in style. Just like the blue Platinum bottle.

As for taste, Bud Light Platinum is similar to the original Bud Light but a tad more sweeter and with a slightly higher alcohol content, 6% versus the normal 4.2% Bud Light. Platinum still pours a honey body with a lighter head. Overall, Platinum is a fine choice for the mid-20’s to early 30’s demographic that Budweiser has so desperately been courting over the years.