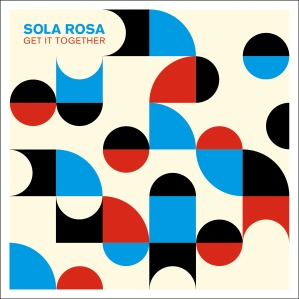 Get It Together album art

I decided to pair up two songs from Sola Rosa that are back-to-back on their 2009 release Get It Together, “Del Ray” and “Humanised” (songs 3 and 4 below.) Granted, it’ll take longer to drink the entire bottle of 14th Anniversary then the 8:02 it does to listen to both songs, but at least you have a starting point. Both songs are upbeat, perfect for the faux coffee taste in the imperial stout that leaves you feeling awake and refreshed.

“Del Ray” is the initial song that made me fall head over heels for Sola Rosa. The songs starts out with trumpets and mariachi horns that are echoed and then electronica loops creep in from the background, giving it a mashup of alien rock with world music funk. Alien rock and world music funk, let that sink in. “Del Ray” also contains piano keys plinking away and a conga drum that is prominent towards the middle of the song. “Del Ray” is an instrumental song that features a guitar solo towards the first third of the song that is reminescent of Rodrigo y Gabriela and their Flamenco and classical styling.

“Humanised” features singer Bajka who brings her soulful vocals to the song. The brass section that starts out the song has a swing vibe to it and is very catchy and Bajka’s vocals are on-par with it. With lyrics like “Before you get your respect/ you got to be humanised”, you begin to realize that Sola Rosa produces much more than just easy-listening music and each song has a purpose while not being overly political or philosophical.

New Zealand’s Sola Rosa dub themselves “kiwi soul” and are honestly nothing like anything else you have ever heard. Their sound is truly unique and they don’t fit into just one genre, they capture soul, funk, world music, spanish, reggae, electronica, and so much more into just one song let alone one entire album. Sola Rosa is working on a new album that is due out sometime this year but make sure you check out their other works and buy their albums!

Upon strolling the beer aisle at my local PCC I glanced over Snoqualmie Falls Brewing’s Louis Quatorze 14th Anniversary Imperial Stout without ever realizing it was actually brewed by Snoqualmie. The brewery typically has a distinct style of branding their beers; Snoqualmie Falls Brewing logo with various background colors depending on what beer it is and the beer’s name. However, if you are making an anniversary ale you want it to stand out from the rest, and their 14th Anniversary stout definitely stands out. The infamous King of France, Louis XIV who ruled for over 72 years, graces the label with a signature of his name, Louis Quatorze (fourteenth) in muted neutral tones which is surprising considering how flavorful the beer is.

Upon the first whiff of the beer you smell aspects of a Porter: coffee, chocolate, honey, and slight spices. However; this particular Imperial Stout is a tad sweeter. 14th Anniversary is a steady 8.6% ABV that packs an unnoticeable punch. Unlike a barleywine that you need to sip and savor, the stout is rich enough to force you to slowly drink it while also making you not take notice of its higher alcohol content. Like many imperial stouts, 14th Anniversary pours very dark – almost black. The beer has soul. Like “Del Ray”, 14th Anniversary has many layers to it. While your first impression is the strong espresso notes, you also start to peel back the layers to reveal dark bitter chocolate along with spices like peppercorns and anise. Sola Rosa as a band is very much like 14th Anniversary, you can categorize them under world music however they give you splashes of various other flavors and make them all one cohesive unit.

The downside of stouts, and porters at times, is how much the brew covers your tongue in a syrup-like glaze. You constantly try to uncoat your tongue of it or continue to drinking so you don’t notice the film developing. Oddly enough, dark beers like this are my personal favorite yet the coating is my biggest pet peeve. 14th Anniversary definitely has coffee notes in it that just glaze your tongue in espresso goodness while leaving that “I just had a cup of joe” aftertaste in your mouth.

After pouring the imperial stout you notice its dark body with a tan head. Once my beer was sitting for a few minutes it did lose its head and appeared flat but upon tasting it still had all carbonation left. Deceiving to the eyes since it looked like soda but once you gave it a good swirl you noticed the head and legs. Despite the quick disappearance of the head, the beer looked and smelled fantastic and that is possibly two of the most important aspects of drinking besides the taste. Overall, the beer is an impeccable and solid Imperial Stout and something I highly recommend to coffee-lovers.